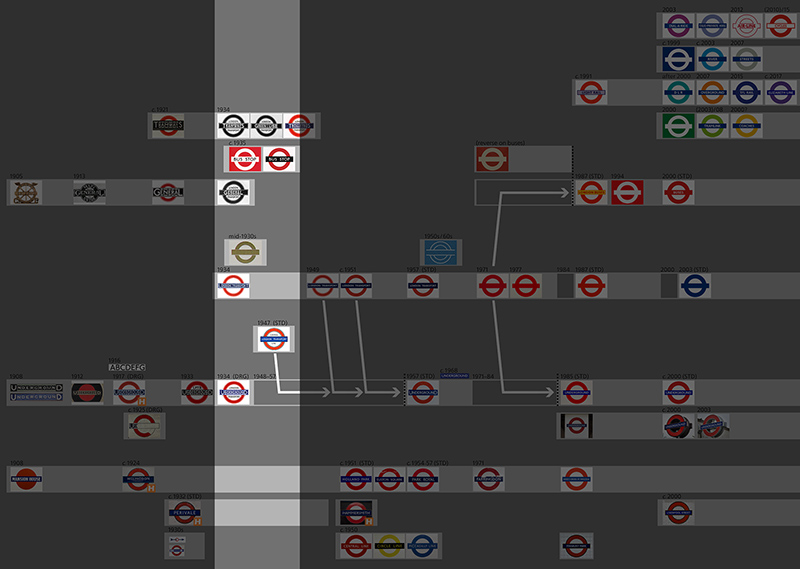 The ‘UNDERGROUND’ roundel: Redesign and implementation

In July 1933 the London Passenger Transport Board was created (usually just called ‘LONDON TRANSPORT’), and a few months later a new ‘LONDON TRANSPORT’ roundel was designed for this ‘top level’ of all the companies involved. It appears to have been created by artists of the printers Waterlow & Sons with some guidance by Edward Johnston.

The following figure demonstrates that most elements of the ‘LONDON TRANSPORT’ roundel are taken from the 1917 ‘UNDERGROUND’ roundel: bar and circle, colours, large and small letters, and the ‘ribbons’ above and below them. Some elements are new or altered though:

The text on the bar is modified. This may be trivial, but the consequences aren’t: There is more text now, therefore the bar is widened, and four letters are placed beyond the circle. Furthermore, the original idea of using the larger letters as bookends is obviously lost on the letters L and T that contain a lot of empty space facing the centre of the roundel.

The ‘LONDON TRANSPORT’ roundel shown above is constructed, trying to show it as it was often applied. Two decisions need to be mentioned:

The following proofs are in the holdings of the Crafts Study Centre (C.86.134.iii/iv/v). It appears that Johnston commented on them, and was consulted over the colours (see Justin Howes, Edward Johnston: A Catalogue of The Crafts Study Centre, Collection & Archive, p. 131). Three things can be pointed out:

The ‘LONDON TRANSPORT’ roundel with lines and ‘ribbons’ was used from 1934 until about 1947. It wasn’t used very frequently because for all purposes related to the Underground the ‘UNDER­GROUND’ roundel was used.

The ‘LONDON TRANSPORT’ roundel was used at bus stops, probably in most cases as a thin roundel (not illuminated) with white counters (part silhouette). And it was used a few times on maps and line diagrams, and on posters.

When the ‘LONDON TRANSPORT’ roundel was created, five other roundels were also created or at least redesigned:

The text ‘LONDON TRANSPORT’ was set in the upper and lower counters of these roundels. This obviously had the consequence that there were no silhouette roundels (void counters) of that design; apart from a few exceptions, that is. 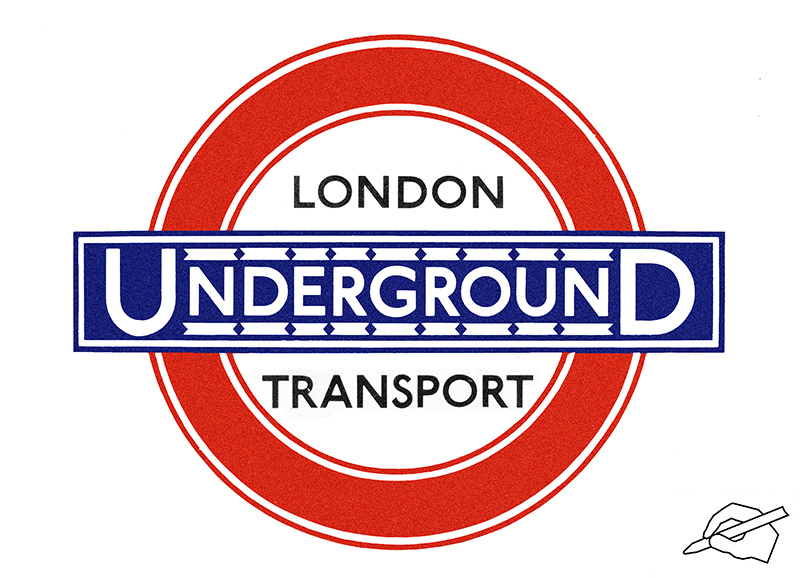 This roundel basically looks like the ‘LONDON TRANSPORT’ roundel , but the bar is considerably less wide, and the large letters U and D have moved towards the centre of the roundel. This roundel has lost the earlier ‘Johnston proportions’.

Again I choose to draw red lines outside the circle because that seems to have been usual. The following roundels have been taken from maps / line diagrams printed in 1933, 1934, 1935 and 1937:

However, the following drawing No. A.N. 7000 shows that engineers again had a preference for black lines. This drawing from the mid-1930s can be found in the London Transport Museum database (twice: here and here) and several times in books on the Underground or Edward Johnston (e.g. in Mark Ovenden, Johnston & Gill. Very British Types, p. 61).

Roundels outside the stations were now designed according to the new standard. The following photographs show the narrow bar and the new line on the inside of the circle. Note that – just like in the preceding period – the roundels are only similar, not identical. Compare the construction of the three bars, for instance: They are all made in a different way. The roundel at ruislip station is even a full silhouette roundel, lacking the white counters with the text ‘LONDON TRANSPORT’. Silhouette roundels seem to have been the exception, but there were a few of them (they can be seen in photographs of Morden station, LTM 1998/58826, Swiss cottage station, LTM 1998/49059, and Stanmore station, LTM 1998/89439).

That is a difficult question. Not only because it’s hard to tell how old the material is, but also because most roundels are made from several elements, and in many cases just some elements were ‘updated’ and the rest wasn’t. Three examples:

Maybe the original metal elements are still in place, freezing the proportions of this roundel. But the rest is definitely newer. Today’s roundel is probably a blend of

Maybe the situation is similar to the one at Rayners Lane station. It is quite likely that the metal elements (that tend to freeze proportions) are from about 1946, but all content was ‘updated’, probably a few decades later: the new circle is unlined, the new counters have no text, and the text on the bar is designed in a different way. (See here for a note on when the large letters U and D were dropped.)

From left to right:

The oldest roundel shown here was a roundel of ‘Johnston proportions’ (c. 1917–1933). Today’s roundel is of new material and of a ‘heritage’ design drawing from the past. But it’s not the original roundel that was revived; proportions and lining are different.

It is remarkable that the station name roundels on the Underground platforms were not influenced by the new drawings. Still the ‘HILLINGDON’-type and the ‘PERIVALE’-type roundels were used to display the station names, with the same proportions and lines as before.

From about 1935 two kinds of simplified roundels could be seen.

On one hand there were new roundels on posters. They simply consisted of a bar and a circle. There was no text on the bar, and the roundels lacked the usual decorative elements, namely names and ribbons. Such roundels were used in large numbers; here’s one example: 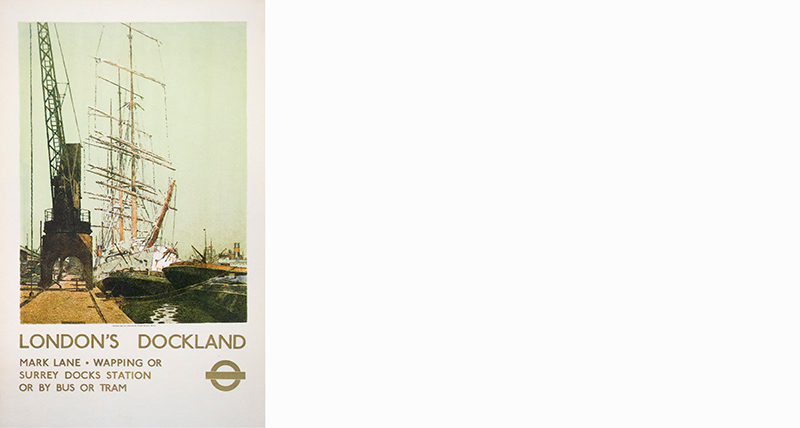 On the other hand there were the new roundels designed by Hans Schleger for overground bus stops, coach stops, and tram stops. His design (below, left) was in use for over five decades, and during that times it was tweaked a number of times in terms of proportions and positioning/tracking of the text (below, right), be it on purpose or by accident.

Image credits, left: Pat Schleger, Zero. Hans Schleger. A Life of Design, p. 98. Right: Some superimposed images, one from a bus stop sign at London Transport Museum Acton Depot, one from David Lawrence, A Logo for London, 2nd ed., p. 65, and one from the LTM website (LTM 1995/2254).

In my opinion all these simplified roundels are heavily influenced by modernism, Bauhaus and the like. Their design is minimalist, clean and sober – and very similar to designs that only came several decades later (think of the DRU roundel, 1971, and of the current TfL roundel). It is remarkable and hard to understand that Schleger’s roundel was used for several decades alongside other roundel designs that were far more decorated and can even appear a bit cluttered in comparison.