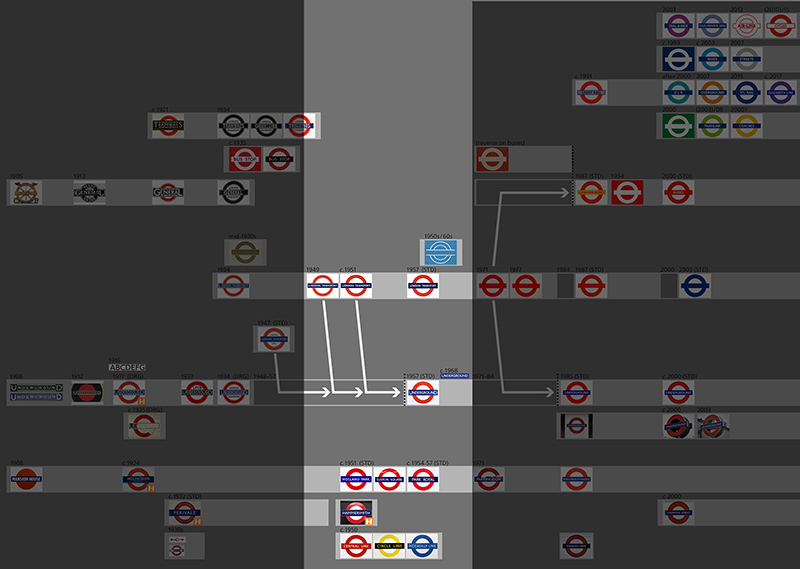 The ‘LONDON TRANSPORT’ roundel had been introduced in 1934. Its key feature was the wide bar needed to accommodate the 16 characters. London Transport continued to use a roundel with these proportions (see below).

But for a short time another roundel could be seen. Its bar was amazingly narrow, even slightly more narrow than the bar of the ‘UNDERGROUND’ roundel as redesigned in 1934. There’s even a master drawing for this roundel (No. CN 9619/27) in the ‘Standard Signs’ brochure dating from March 1938, amended 19th June 1947.

It appears that this kind of roundel was put to use namely on the eastern branch of the Central line, at stations that were opened in 1947. Here’s an example from Gants Hill station (note the thin, but protruding metal frames):

Note that today’s roundel (right, picture taken in 2017) draws from the past, but has completely different proportions.

Simplification of the roundels with the wide bar

In 1949 and 1950 the ‘LONDON TRANSPORT’ roundel with the wide bar, dating from 1934, was simplified in two steps by first removing the ‘ribbons’, and (one year later) removing the lining. In addition, all letters had the same height now. It seems that proportions remained the same. (For some more information see Tim Demuth, Johnston, in: The London Bus Magazine, No. 36, Spring 1981, p. 10).

Simplification, first step (click here to see the animation again; works with some browsers only).

Simplification, second step (click here to see the animation again; works with some browsers only).

A three-dimensional version of this roundel was used a lot outside Underground stations. It can be seen on many old photographs, often in the company of a ‘BRITISH RAILWAYS’ sign. How frequently it was used elsewhere I don’t know.

Note that these are silhouette roundels (void counters). According to the 1951 ‘Standard Signs’ brochure counters could be ‘white or void as the architecture demands’.

Most of these roundels have been replaced since. Only some of them are still in place, though usually with a different text on the bar.

Altered proportions in the mid-1950s

The wide bar that was introduced in 1934 disappeared in the mid-1950s: A new ‘LONDON TRANSPORT’ roundel with revised proportions was designed. Its bar was less wide, a bit higher, and its circle was a bit more sturdy:

The new proportions are shown in the 1959 ‘Standard Signs’ brochure, but they were used before that year: They can be seen on photographs dating from 1953 and 1956. Note that not only proportions, but the whole design is different from the silhouette roundels last mentioned: These new roundels are panel roundels in a smaller version of the ‘tombstone’ shape.

I don’t know how frequently these new ‘LONDON TRANSPORT’ roundels were used.

And here’s another set of photographs from the same period, showing roundels of very similar proportions, but of a silhouette (or, in one case, part silhouette) design.

Again I don’t know how common this design was.

As mentioned above there was no ‘UNDERGROUND’ roundel from 1947 until 1957.

Return of the ‘UNDERGROUND’ roundel in 1957

In 1957 the ‘UNDERGROUND’ roundel returned.

Note that the first and the last letter (U and D) were larger than the other letters. This is contrary to expectation: The ‘LONDON TRANSPORT’ roundel had abandoned this decorative feature around 1950, and its re-introduction seven years later, exclusively for the ‘UNDERGROUND’ roundel, is hard to understand.

In the preceding periods the three-dimensional ‘UNDERGROUND’ roundels outside stations may have loosely adhered to a drawing or template, but they varied strongly.

This was no different in the late 1950s and in the 1960s. The three-dimensional roundels outside the Underground stations were close enough to the ‘PARK ROYAL’ and also to the ‘EUSTON SQUARE’ proportions, but still they varied strongly. It’s hard to make out patterns, but let’s try.

Be aware that the following is mainly guesswork, and a bit chaotic.

One type of roundels outside Underground stations 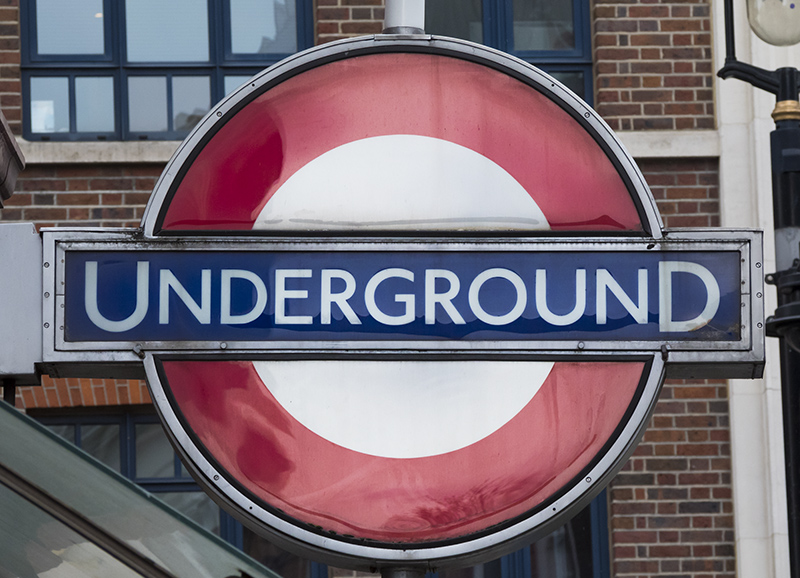 This type was very common, and even today quite a few of these roundels are still in place. The original roundels probably had the word ‘UNDERGROUND’ on their bar, with a large U and D, but without the ‘ribbons’ (very much like on the above photograph). Some of today’s roundels do feature those ‘ribbons’, probably for ‘heritage’ reasons, but mostly the effect isn’t really good; the bar is just not high enough to accommodate the word ‘UNDERGROUND’ with ribbons (see some of the images below).

Below there are some of today’s roundels. The outer frames and the width of the circle appear to be identical, but apart from that there are quite a few differences in materialisation. Moreover, the design of the bar varies quite strongly.

Another type of roundels outside stations 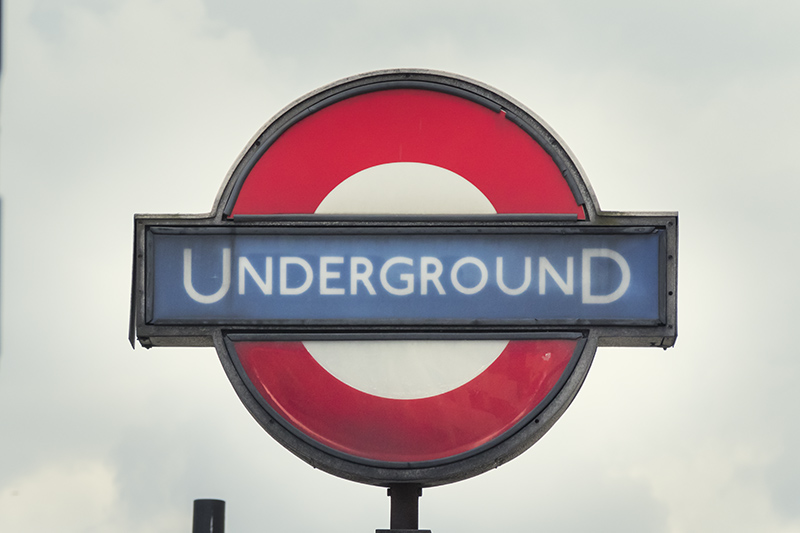 Picture taken at Blackfriars station in 2017.

This type can be recognised by the four screws on either side of the bar. It may have been introduced around 1960. Its bar is higher (compared to the type just mentioned).

Below there are some of today’s roundels:

... and one more type of roundels outside stations

Perhaps one more type can be identified. It looks like this as a silhouette roundel:

Right: Mornington Crescent station, 2017. The frame may still be the same that was installed around 1955, but the bar has seen a few changes:

The following roundels possibly belong to the same type, implemented as a ‘part silhouette’ roundel (silhouette with white counters): 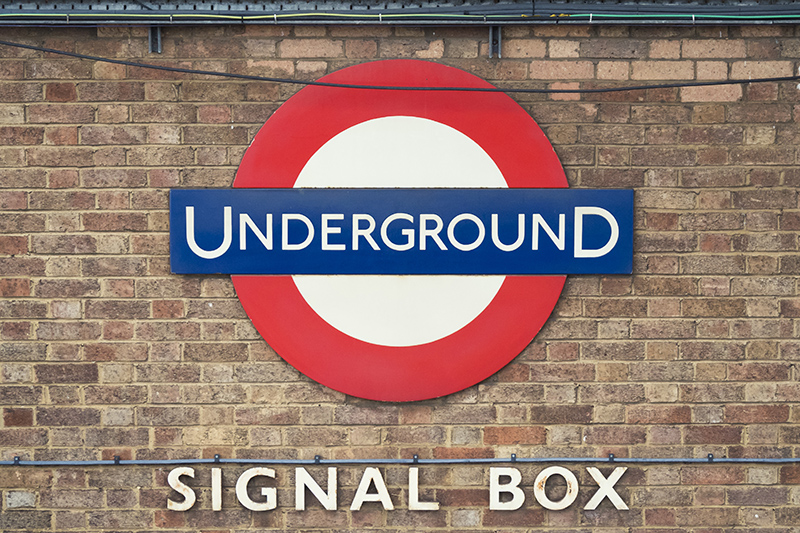 Picture taken at Upminster station in 2017.

This type of roundel is ‘part silhouette’ (i.e. silhouette, but the counters are not void). Compared to most other types it is very simple. In particular there are no frames at all.

It appears that these roundels generally had ‘PARK ROYAL’ proportions except for the width of the bar which seems to have been flexible.

There are not many of these roundels left. Another one of them is outside Goldhawk Road station: 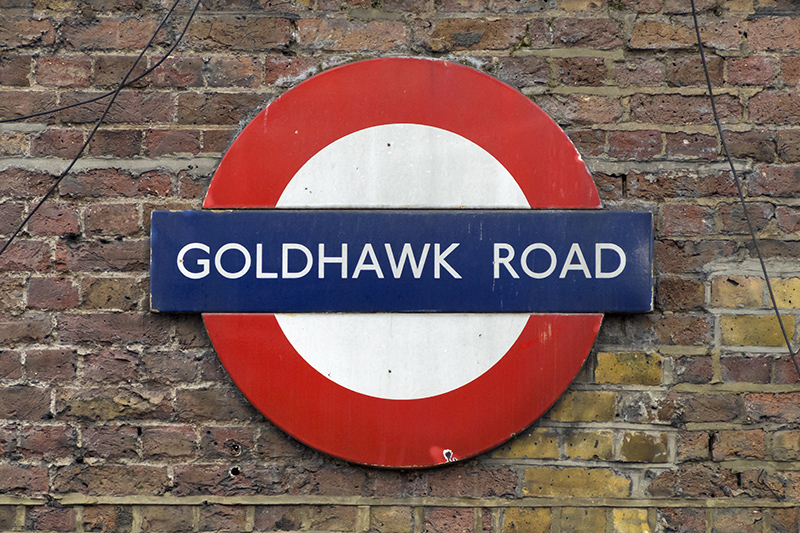 This type of roundel is remarkable. Its design is far away from the types mentioned above. These roundels are ‘part silhouette’ roundels (white counters) on a black background, placed in ‘boxes’. It is hard to believe that these roundels appeared around 1959, alongside some of the types just mentioned, but it seems that they did:

It appears that before the 1950s there were no roundels representing Underground lines. From the 1950s such roundels were introduced (maybe not systematically, not for all lines) and could be seen on platform wall friezes.

(Here’s some more on frieze roundels).

UNDERGROUND: Same size letters – since when?

When the ‘UNDERGROUND’ roundel returned in 1957, the first and the last letters were larger than the others. In today’s roundel all letters are the same size.

Therefore, when we see an ‘UNDERGROUND’ roundel where all letters are the same size, we can’t be certain it’s a post-1984 roundel. It may well be a lot older and date from the late 1960s.

Things were less complicated on the level of the station name roundels. Based on the ‘PERIVALE’-type roundel the lines were removed (‘HAMMERSMITH’ type), and the panel roundel was introduced (‘HOLLAND PARK’ type). Links lead to some more details.

In the 1950s proportions of the panel roundel changed. The ‘EUSTON SQUARE’ and the ‘PARK ROYAL’ type roundels appeared. Links lead to some more details.

I’d like to point out an outline roundel that was used quite frequently from about 1966 until 1971. It is interesting because it consists of two unconnected parts. They are only connected in our mind, because we know it’s a roundel.