The headings in this text are set in a digital version of Clarendon.

Clarendon is an international product, having originated at the Fann Street Foundry in London around 1850, having been refined in Switzerland around 1950, and later digitised by Berthold, Bitstream, URW++, and Linotype.

Most digital ‘Clarendons’ available today are extremely close to the Clarendon typeface designed by Hermann Eidenbenz and issued 1952 by the Haas’sche Schrift­giesse­rei AG of Münchenstein (near the city of Basel, Switzerland). That typeface has become something like the Clarendon.

The Clarendon story is twisted in more than one way. Here’s a shortcut:

Origins: Eidenbenz reworked some older typeface called Egyptienne that was present at the Haas’sche Schriftgiesserei. It turns out that this Egyptienne was in fact original English Clarendon material, about 100 years old.

Weight: Tradition seems to ask for some sturdiness in a Clarendon. I mentioned above that Eidenbenz reworked the old Extended Clarendon, and looking at that typeface you’ll notice that it was not only extended but also semibold at least. Eidenbenz made it even a bit heavier: He wanted to design a pronounced display typeface. Therefore today’s regular Clarendon is really a semibold typeface without saying so. Today you’ll also find a lighter weight, but even Clarendon Light is still heavier than the regular weights of, say, PMN Caecilia or Egyptienne F.

Weight: Tradition seems to ask for some sturdiness in a Clarendon ... but do note that in the 19th-century group of Clarendons three out of five typefaces were of regular or light weight! This doesn’t fit in, but there you are.

Situation: The 19th-century Clarendon and Extended Clarendon were situated between the modern and the Egyptienne typefaces. Namely Clarendon could be used with a modern typeface in the same way we would, today, simply use a bold weight for emphasis. This situation has changed completely. Today, most typefaces that are advertised as ‘workhorses’ come as families and have their own bold weights; and Clarendon itself was turned into a contemporary type family, far more homogenous than the earlier group of Clarendons.

According to literature Clarendon was issued by the Fann Street foundry in 1845. The foundry issued a specimen book in 1846, and it’s hard to understand why Clarendon isn’t shown in that book. Commercial Classics write that it was first shown in 1848 (external link). I’m far from having the complete picture, but there's a 1857 specimen that shows Clarendon, Condensed Clarendon, Extended Clarendon and Thin-faced Clarendon, and a 1873 specimen shows one more, that is Extended Clarendon, No. 2. Here’s the whole group:

Now let’s look at some type specimens issued by other foundries that show Extended Clarendon.

I'm pretty sure it’s the very same typeface, but we have to be a bit cautious. Extended Clarendon was very inconsistent across all the type sizes, therefore one has to compare the exact type sizes, otherwise it’s impossible to judge if the letterforms are identical. Comparing the specimen books I got the impression that the typefaces match in certain type sizes but not in others. Below we have a match with Extended Clarendon, Canon (Fann Street Foundry, 1873) on the left and Egyptienne, Corps 40 (Haas’sche Schriftgiesserei) on the right:

Some more appearances of Extended Clarendon – under different names – in type specimens from the continent: 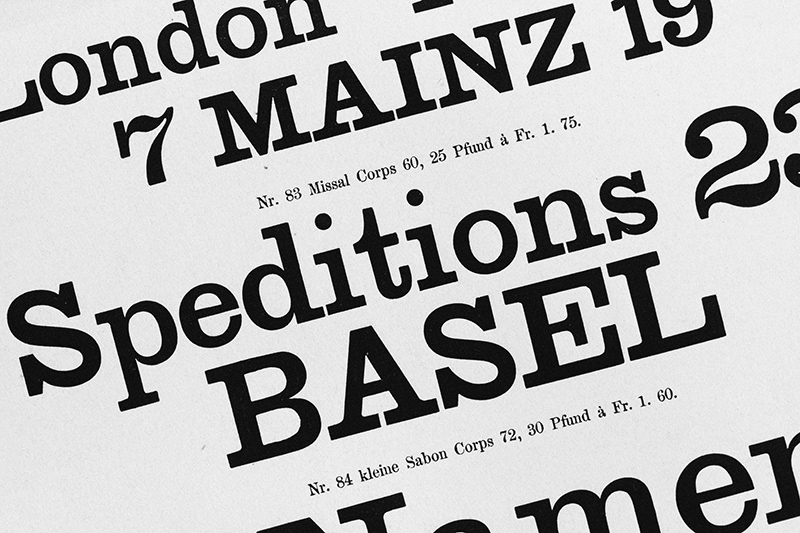 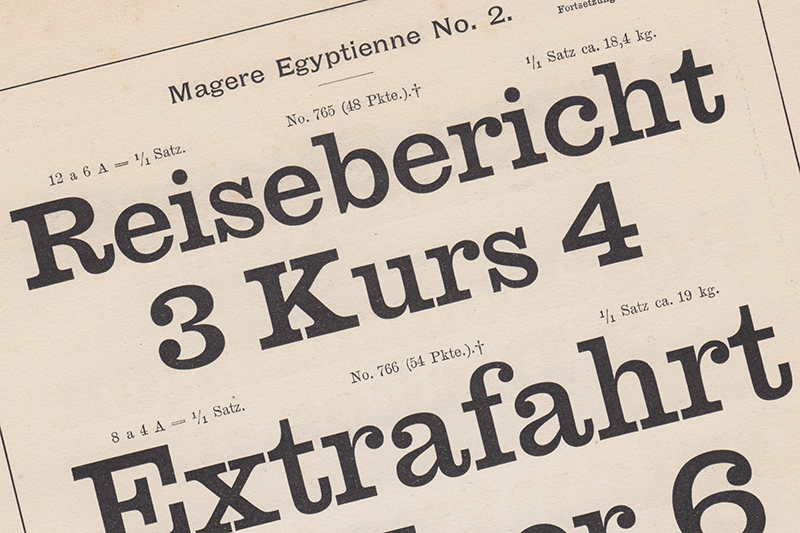 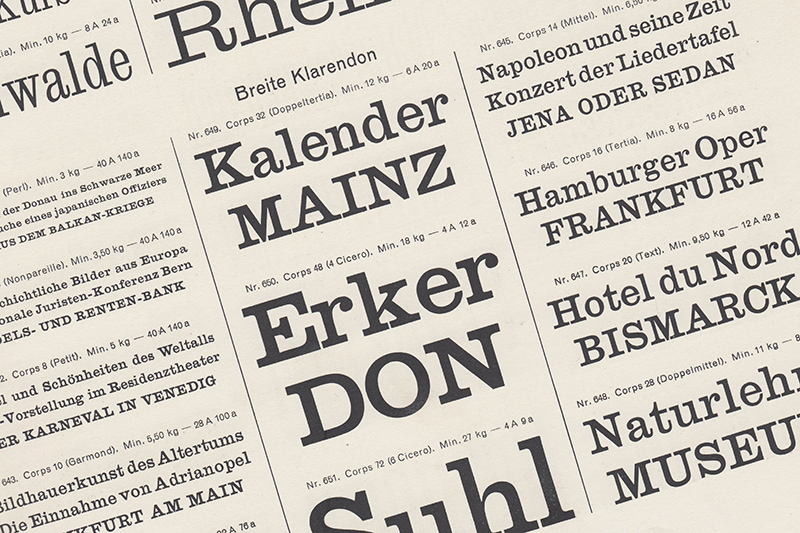 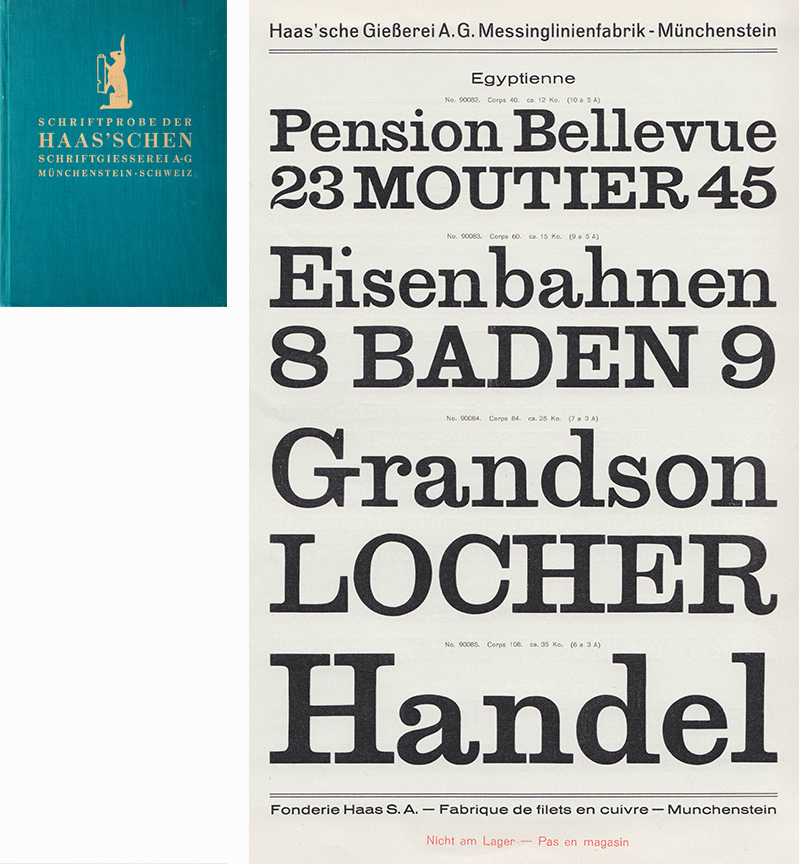 Taking a closer look at that specimen will make clear why Eidenbenz wanted to make the typeface more balanced and more consistent across the type sizes. Compare the stroke widths of o and n in Grandson, for instance. Or compare the exact shapes of a, d, E, R in different type sizes. And so on.

As stated further up, the Haas’sche Schrift­giesse­rei issued the new typeface, designed by Hermann Eidenbenz, in 1952. The improvements became apparent when we compare the old and the new typeface:

The new typeface was originally issued in one weight. It was named Clarendon, without an adjective like regular or normal: 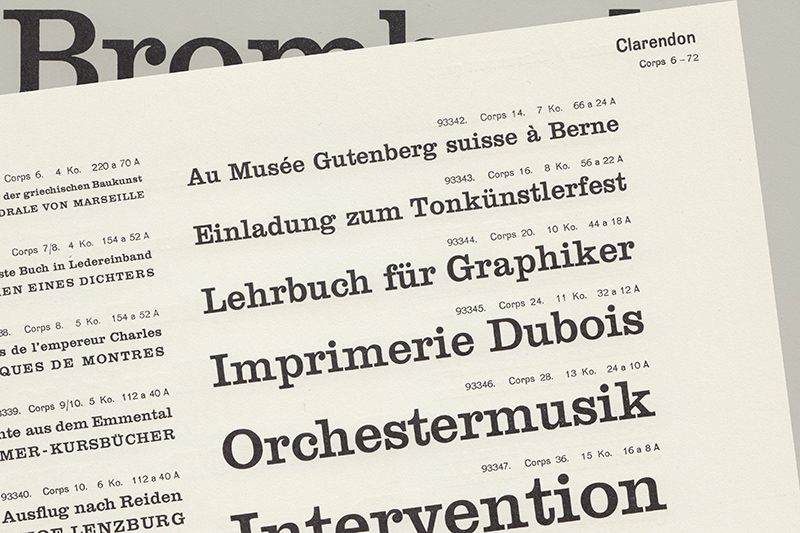 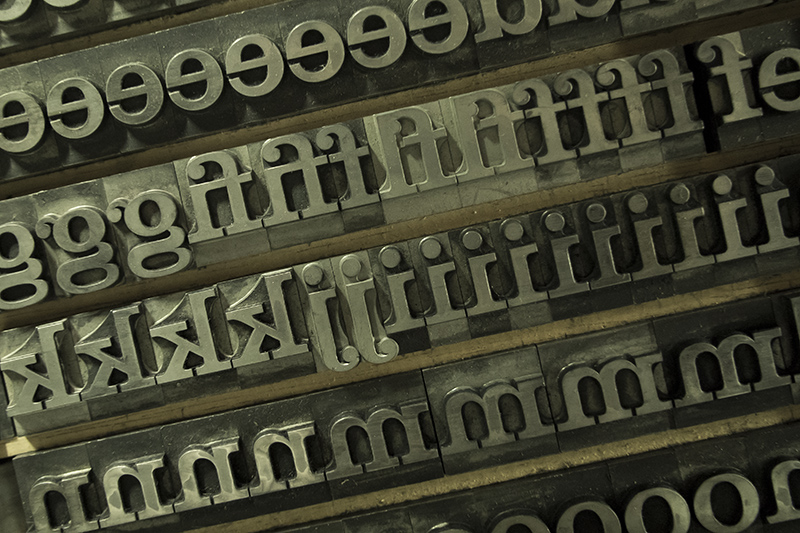 Clarendon was successful, and it was decided that a few more weights should be added. First came a bolder version (Fette Clarendon), and a few years later a light and semi-bold version (Clarendon mager, Clarendon halbfett). It is only after these additions that the original weight was sometimes called Clarendon normal: 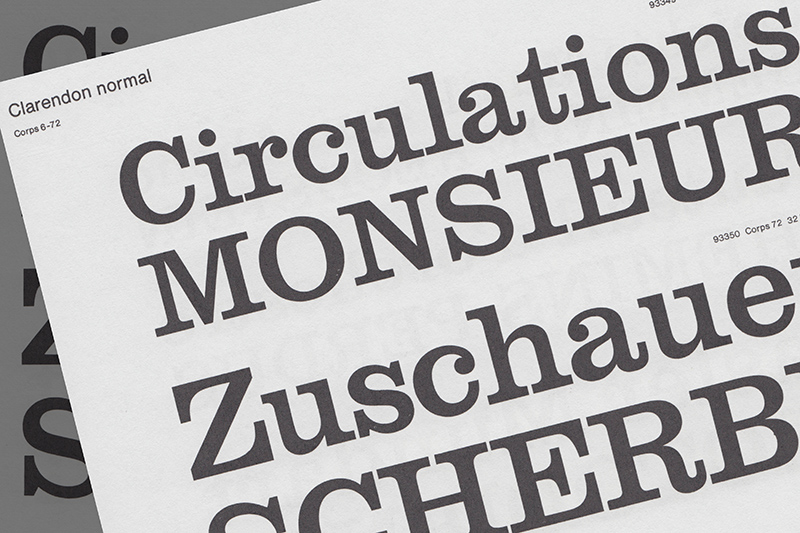 But there still was no truly light weight. Even Clarendon mager was quite sturdy.  This only changed when the digital type family was designed: Clarendon Light BT (below, bottom) is considerably lighter than the letterpress typeface Clarendon mager (below, top). I believe that it is this new digital light weight that Willberg considers to be suitable for body text (Hans Peter Willberg, Wegweiser Schrift, p. 67). Do note, though, that even Clarendon Light BT is still somewhat heavier than the regular weights of PMN Caecilia and Egyptienne F (just to mention two related typefaces).

Clarendon BT, produced by the Bitstream foundry, is basically a digital version of Clarendon (Haas). The following figure shows that the digital version (bottom) is very close to the original (top). Only some details were altered, look at a and u, for instance; and the digital typeface is a bit bolder and needs more room.

Clarendon BT is not the only digital version of Clarendon (Haas). The URW++, Linotype and Berthold foundries each issued their own digital versions. From samples available on various websites I gather that there are some subtle differences, but generally all these digital typefaces are close to the original.

(where not given above)