History of the roundel – an outline

There’s more than just one way to look into the development of the roundel. A good way, I find, is to show the development on separate layers, keeping apart the ‘UNDERGROUND’ roundel, the ‘LONDON TRANSPORT’ roundel, the station name roundels and others. That makes it easier to see when changes occurred, and in what way one design affected another. This is the basic idea: 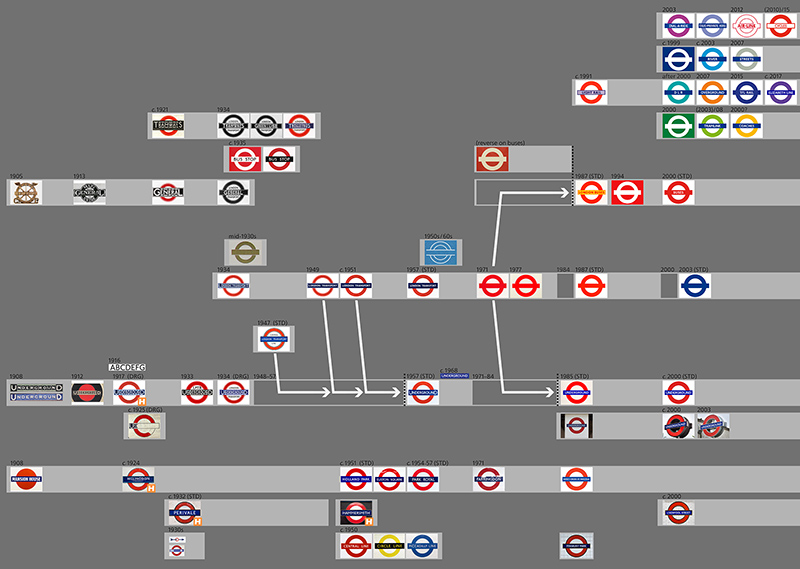 The three main layers have been mentioned above. They can be found in the lower half of this larger diagram. Towards the top there is a ‘BUSES’ layer; above that layer things get a bit untidy due to the abundance of today’s ‘mode’ roundels. Strewn in between all the layers are important variations in design that are related to the respective layers.

From about 1948 until 1957 the Underground was not represented by an ‘UNDERGROUND’ roundel. These years are left blank (dark grey). During that time the ‘LONDON TRANSPORT’ roundels were used to represent the Underground as well. This is indicated by the arrows. Same or similar developments can be seen in other places as well.

The orange square with the letter H points out a few earlier designs that seem to have ‘heritage’ status which means that they’ll probably stay, and won’t be replaced by a newer design.

The diagram can give a general view. It will never be complete and accurate. And, of course, a great number of variations in design is intentionally not shown.