This post may soon be a bit retro. Technology is evolving rapidly. In a few years’ time there may be no real ‘writing with dots’ on train indicators and similar displays any more. They may all get replaced by displays that work very much like a computer monitor or like a display of a mobile device. (Diamond geezer shows two new generation displays in a British Rail Class 710 train.)

The first example is part of a ‘Emergency – Do not enter’ sign. These signs can be found just outside many Underground stations.

This is a display that uses large, discernible dots that are arranged freely, without a grid or matrix. Therefore this is, of course, no dot matrix sign. The text can’t move or change; the whole thing is either off or on.

What I find interesting here is that quite some effort was made to really design letters. The letterforms might well be part of a typeface that would be

Some letters look absolutely fine. Others – like n and r – show that there are limits as to what can be done using this technique.

The next example is one type of the next train indicators that can be seen on the platforms of the London Underground.

This is a display that uses large, discernible dots arranged in a grid; these displays are often called dot matrix displays. The text can move and change.

A display like this one can be called a dot matrix display for the following reasons:

A coarse grid allows for the construction of recognisable letter shapes, but there’s not much room for design. In fact, one is tempted to say that the text shown above is as close to ‘plain text’ as one can get.

It’s interesting to compare different dot matrix signs because they show different ways to deal with the compromises that have to be made. Some letterforms look better than others. And depending on the number of dots available, certain parts of the letterforms, like ascenders and descenders, are treated in different ways. In the last example below neither the baseline nor the x-line (about in the middle of the letterform) are fixed!

The next example is a display used on London Underground S Stock trains. Some examples: 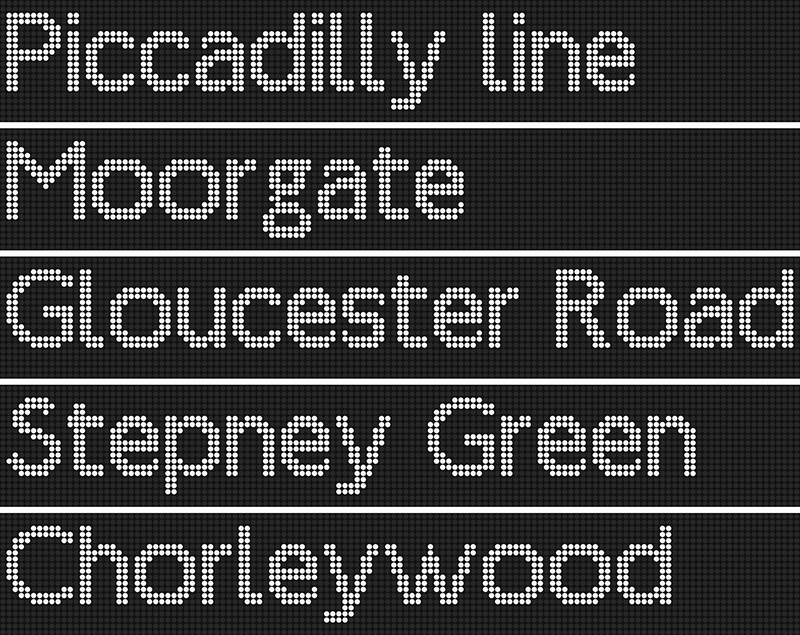 Here’s a comparison between one of the coarse dot matrix examples from further up and the finer ‘Johnston’ dot matrix:

And here’s a comparison between the  ‘Johnston type’ dot matrix letterforms used for S Stock trains and other letterforms that can be seen e.g. on 1973 and on 1995 Stock trains:

The next example is a newer kind of display; it can be seen outside Oxford Circus station (picture taken in 2017): 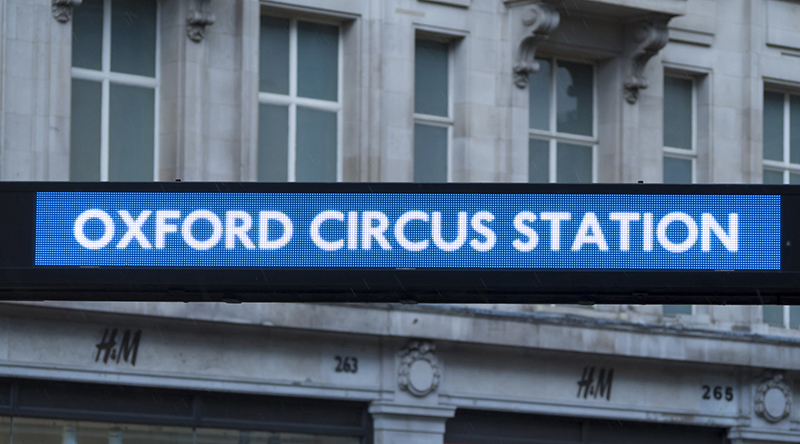 This display has a higher resolution. From a typical viewing distance the LED dots can’t be kept apart. The letterforms are those of a Johnston typeface, but I assume that in this case the letterforms were not pre-constructed dot by dot, but they are rasterised while being displayed.

This is not a dot matrix display any more.

Moreover it appears that the dots can take on different colours and varying levels of brightness:

There are many typefaces out there that were designed to look like they belong to one of the categories shown further up.

And yes, design-wise they may belong to one of those categories. But technically they are usually quite different: The dots you see in an old dot-based display are the smallest elements of the display that light up. The dots you see in the typefaces below are not the smallest elements; each dot is a vector shape that is laid over a grid of even smaller elements (pixels), so that each dot is actually made from a bunch of pixels. Therefore if you buy a dot matrix font you buy a vector-based font that uses sophisticated technical means to mimic an earlier, quite different technology. There’s absolutely no necessity to do that, but it’s done all the same, sometimes in a playful manner.

Selavy, designed by Nina Stössinger, is similar to the first example shown above.

FF Dot Matrix, designed by Stephan Müller and Cornel Windlin, is similar to the second group of examples shown above. Each dot is produced by a vector shape (below).