Holland Park station was refurbished in 2016. Let’s have a look at some of the design elements that were removed, and some of the new elements. We’ll start out with a few pictures, and then we’ll have a look at the roundels and the typefaces that can be seen on the platforms. 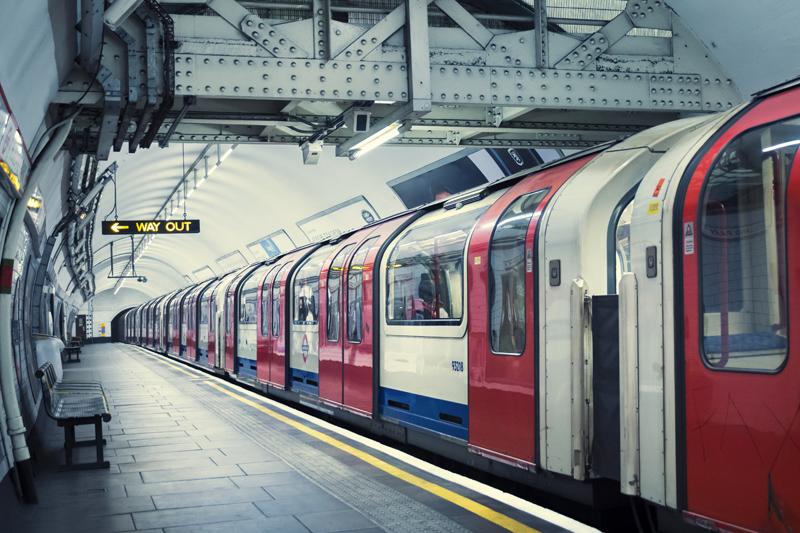 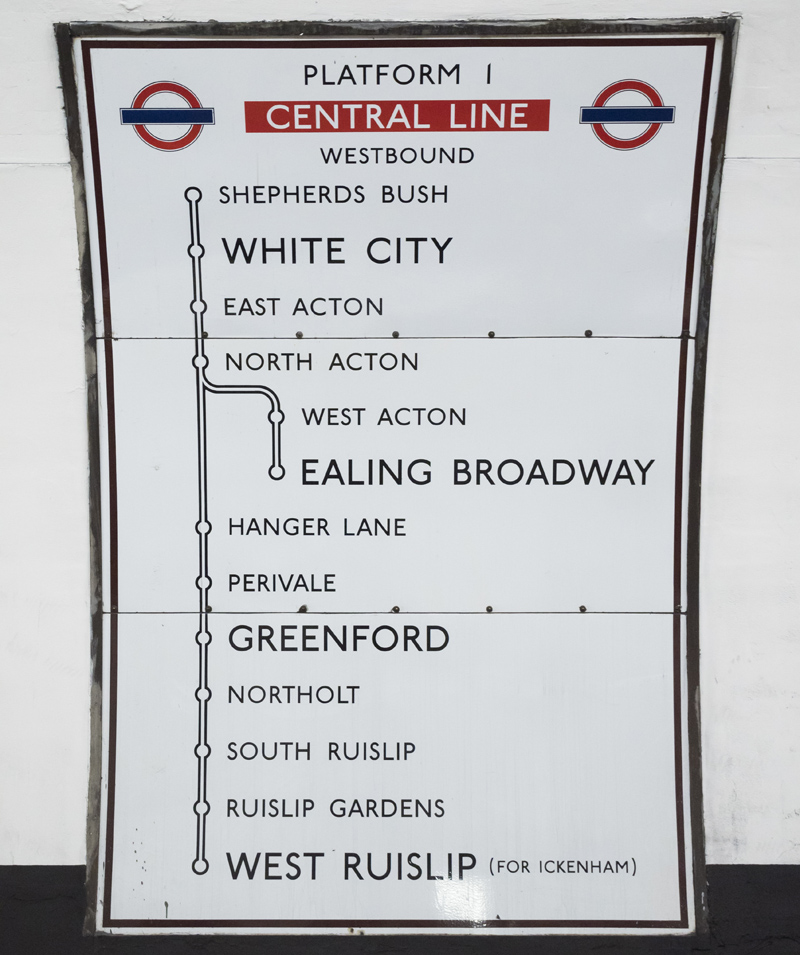 Old trackplate, still in place after the 2016 refurbishment (picture taken in 2017). 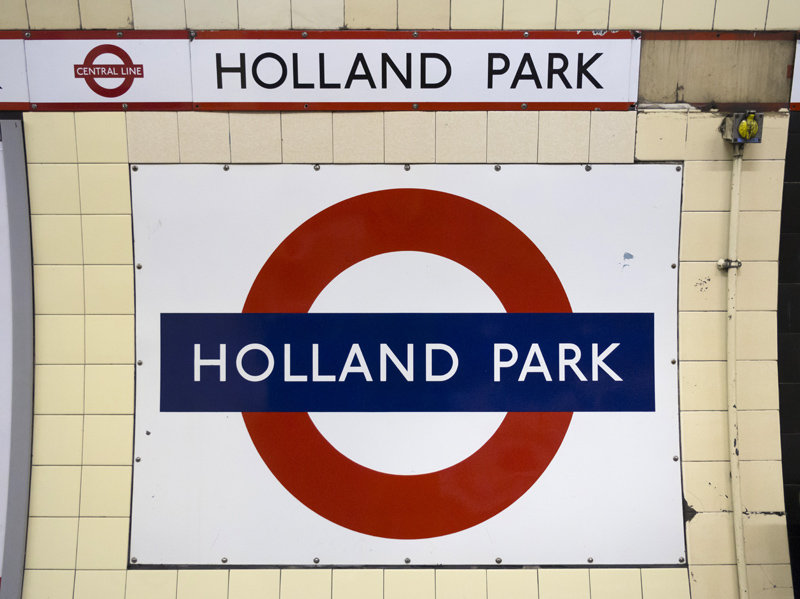 This picture, taken in 2014, shows the tiles, frieze, and station name roundel before the station was refurbished. Today everything is gone.

The station name roundels were of the rather massive ‘HOLLAND PARK’ type. Maybe they were the last ones of that type on the whole London Underground network. 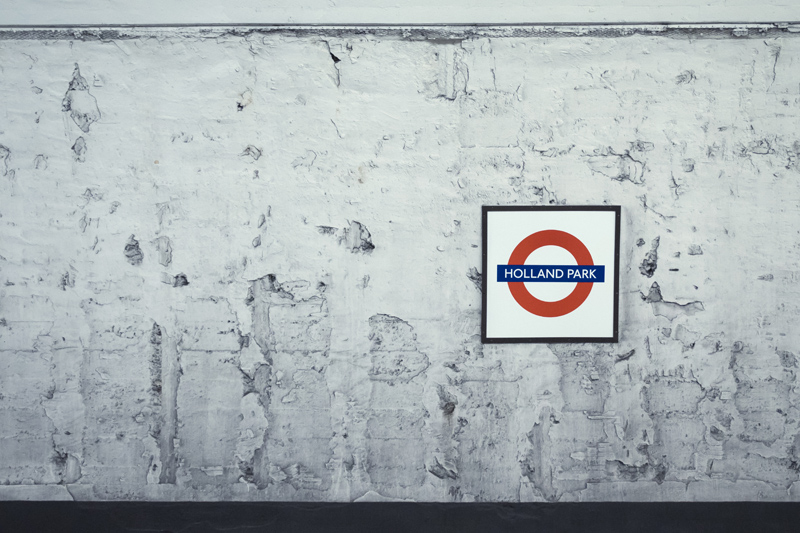 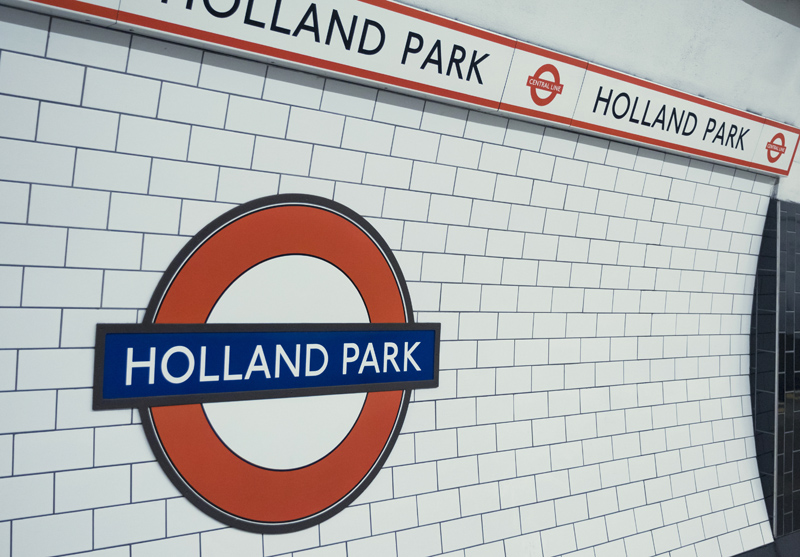 During the 2016 refurbishment new station name roundels were put in place.

The new station name roundels are interesting. One would expect to find ‘LIVERPOOL STREET’-type silhouette roundels, because that type has become the preferred type in that kind of environment. Or else ‘PERIVALE’-type roundels for the ‘heritage’ touch. But the new roundels are different.

The new roundels are a blend of the two types: They are roundels of the ‘PERIVALE’-type design shrunk to the proportions of the ‘LIVERPOOL STREET’ type (compare the three photographs above).

In other words: They are roundels of 1920s design except for their modern proportions (c. 1985 / 2000). This is a rare design. I only know of two more roundels of that type; both of them are installed on the northbound platform at South Woodford station (installed 2008 or earlier, picture taken in 2017).

The small roundels on the friezes are not as interesting as the station name roundels, but let’s have a look at them anyway. Below there’s the old frieze roundel (left) and the new frieze roundel (right).

The old frieze roundel is an example of the 1950s tradition to include roundels representing the Underground line on the friezes.

The new frieze roundel was probably added for some ‘heritage’ effect. Most of the newly installed friezes along the Central line don’t have such roundels.

The two frieze roundels are not identical in terms of proportions.

That is particularly interesting here, because in 2016, while Holland Park station was being refurbished, the Johnston100 typeface was issued. Therefore it’s worth looking at the text on the station name roundel, on the frieze, and on the frieze roundel. 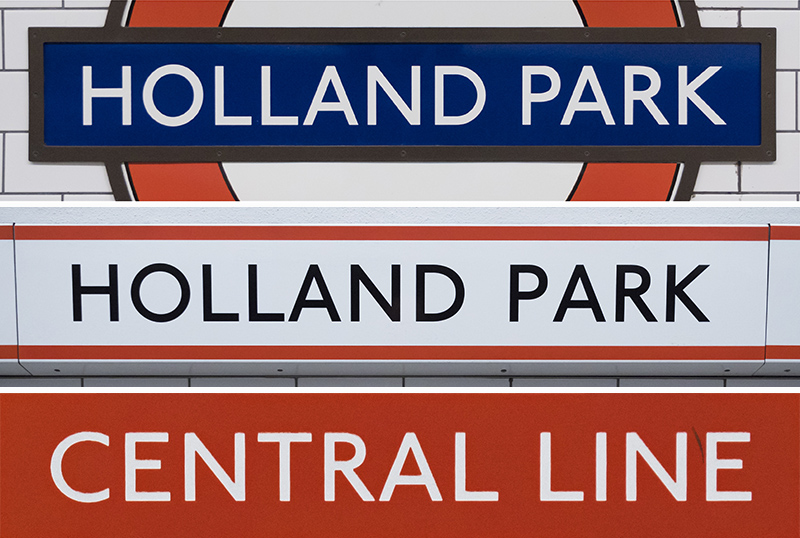 Indeed we find the Johnston100 typeface on the frieze, saying HOLLAND PARK, and CENTRAL LINE in the roundel. The new typeface is not easy to identify because capitals of Johnston100 are almost identical to the capitals of earlier Johnston typefaces, and they are therefore very hard to tell apart. In this case Johnston100 can be identified by the letter R which has a higher and smaller bowl, and the leg at a special angle.

But what about the text on the new station name roundel? The letters R and K don’t look like Johnston100. The differences are easily spotted (despite the distortion present in the photographs) when some letters are enlarged and the colours are brought in line, as follows: 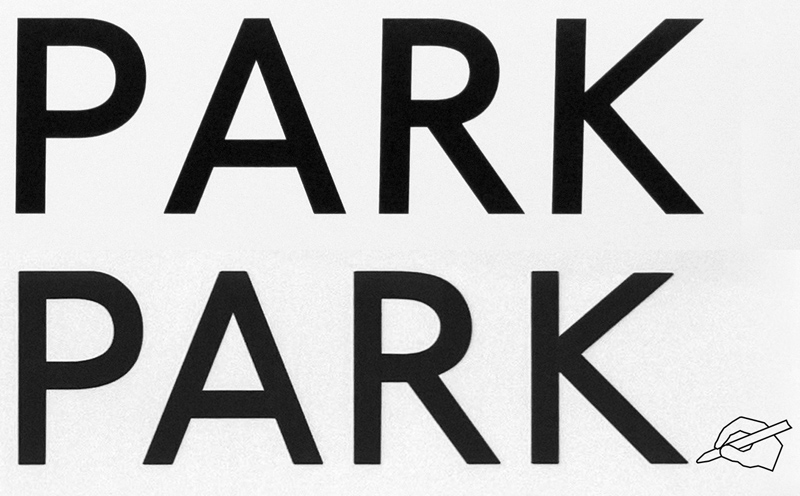 Besides, the text on the bar of the station name roundel is rather light. It is Johnston100 regular. Design standards ask for the bolder ‘medium’ weight. In my opinion this irregularity is for the better: Most roundels look better when the regular weight is used, especially in this case where the bar is of a modest size and heavily framed.